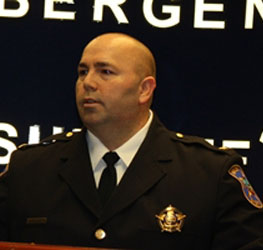 Chief Pell began his law enforcement career in 1992 becoming a Correction Officer and maintained housing and security operations at the Bergen County Jail. He quickly moved up the ranks and in 2002 was promoted to the rank of Sergeant. In April 2005, Kevin was promoted to the rank of Lieutenant and in 2009 to the rank of Captain. As Captain, he coordinated the agency’s Accreditation program which was recognized by the state of New Jersey in 2013. In 2016 Kevin was promoted to Chief of the Sheriff's office. He is a Certified Public manager and has attended the FBI Law Enforcement Executive Development program. Chief Pell is also a state certified police instructor and a defensive tactics instructor.